The gig economy reenergised by Covid-19 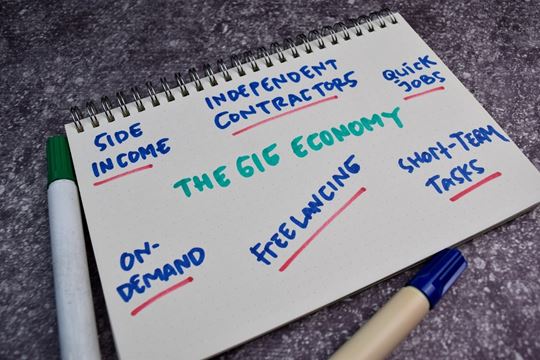 The way people live, work and spend their money has changed drastically over the past decade, particularly with the rise of smartphone technology. Being connected to just about the whole world via social media, has created many ways to make and spend money and has given rise to the gig economy as we now know it.

The term “gig” is slang for job that lasts a specified period of time, most commonly used in the past by musicians. More recently however, this term has become more common when referring to a ‘freelancing’, ‘moonlighting’ or ‘side hustle’ situation where those with specialist skills make themselves available for side-gigs in addition to their full-time jobs. This activity has grown, and an entire economy has developed as a result where gigging for some is all they do, and the full-time 8 to 5 job is no longer required or wanted. According to Investec, 37% of US adults and more than 50% of millennials have a side hustle. Locally, Statistics SA’s employment outlook has found that temporary employment rose from 2.6 million in 2017 to 3.9 million in 2018.

A gig economy is best described as a free system which consist of temporary positions and independent workers for short-term commitments. It’s a labour market is characterised by flexible, on-demand work rather than the more traditional nine-to-five, office-based set-up. The gig economy includes freelancers, independent contractors, project-based workers and temporary or part-time hires across all industries. While gigs can comprise anything from DIY work to landscaping and childcare, the real money lies in jobs needed to support the exponential rise of digital innovation.

So, while gig work is nothing new, when referring to the gig economy in its present format, it is largely driven by those with a skills set supporting new technology-enabled types of work or gigs. For a country like SA that’s facing massive unemployment challenges, the growth of the gig economy carries with it many benefits, providing job opportunities while boosting productivity.

Pros and cons of gig work

Gig freelancers can work from wherever they like, whenever they like and for whomever they like.  The timing of jobs is also more spontaneous thanks to apps and websites that automatically connect people to deliver on requirements in real-time. Individuals can bolster their earning potential and realise their passion with side gigs, while businesses can tap into the sought-after skills they require, without the need to permanently employ staff.

There are many people who enjoy freelancing and not being tied down to one job. “Free agents reported higher levels of satisfaction in multiple dimensions of their work lives than those holding traditional jobs by choice, indicating that many people value the non-monetary aspects of working on their own terms”, (McKinsey, 2020). But we have to also keep in mind how many of these workers are people who are gigging out of necessity because they can’t get the full-time job that they’d much prefer.

Some say the gig economy empowers entrepreneurs, while others believe it’s just another way of exploiting workers. In most countries, only employees are entitled to the protection of employment legislation, such as being protected from unfair dismissal, and receiving minimum basic benefits such as holiday pay, sick leave and minimum working hours. Independent contractors are not offered such protection and their recourse is limited to what is contained in their service contracts.

But this may be changing too. For example, Uber has recently outlined proposals for a new type of relationship with “gig” workers, including its own drivers, that would keep them as independent contractors but with some guaranteed benefits. The move comes with Uber and other firms facing legal pressure to comply with a California law that would require its drivers to be classified as employees, eligible for unemployment, medical and other benefits.

Uber describes “a new model for independent platform work” in an 18-page document it hopes can be used as a blueprint for Uber and similar firms relying on independent workers. Uber has proposed that gig economy companies be required to establish “benefits funds,” allowing gig workers to accrue and use the money for benefits or paid leave. (eNCA, 2020)

Marc Kahn, Investec’s global head of Human Resources and Organisational Development, believes the gig economy can be a threat or an opportunity to business, depending on how companies look at it. Kahn believes the growth of the gig economy will drive a revolution in the definition of what a company is. “A company is real by virtue of those who are employed in it and some of the assets in it. But what if all the people employed in the company are employed as gigs? Where is the company? Where is the culture of the company? Where does the company begin and end? What about the notion of teamwork?” (Investec, 2020)

A recently published report by Fairwork Project in collaboration with the Universities of Oxford, Cape Town (UCT) and the Western Cape (UWC) evaluates the working conditions of digital platforms and ranks them on how well they do. It’s an Oxford University-backed initiative. “The research focused on the following platforms: Sweep South, M4Jam,Picup,GetTOD,NoSweat,Uber, OrderIn, MrD,Bolt and UberEats. Across contexts, Fairwork’s research has shown that gig workers face low pay (frequently earning below minimum wages), dangerous work conditions, opaque algorithmic management structures, and an inability to organise and bargain collectively. The Fairwork research shows that some platforms are actively trying to create good-quality work, whereas there is no evidence that others are operating with the same concern. One danger according to Fairwork researchers is a race-to-the-bottom that squeezes good practices out of the market,” (FastCompany, 2020)

The research also found that gig economy platforms benefit from a legal loophole that exists in South Africa, as in most countries, labour rights are limited to workers classified as ‘employees’. Digital platforms can avoid the costs and duties arising from employees’ rights – minimum pay, maximum hours, paid leave etc. – by classifying their workers as ‘independent contractors’.

COVID 19 has slowed down economies worldwide. People have been forced into lockdown and self-isolation to minimise the spread of the virus and major industries have come to a grinding halt. Before this pandemic, there were difficulties trying to figure out how some industries could make the transition towards a ‘work from anywhere’ culture, where technology was sometimes seen as a luxury as opposed to a necessity to get the job done. In many ways COVID-19 has acted as a catalyst, resulting in many industries adopting new remote ways of working.

This, it is believed will in turn fuel the gig economy. For the first time in the history of work life, we are seeing employers encouraging employees to work remotely albeit for a safer environment.

“The Covid-19 crisis has forced businesses in industries previously impervious to remote working to reengineer their work processes and bolster their technology support systems, which have been the traditional barriers to alternate work arrangements.  This provides a wide variety of natural experiments, that will provide a good starting point to organisations contemplating a switch to the gig economy model,” (Harvard Business Reviews, 2020).

In support of this, employees are finding ways to prove to their bosses that despite not being in the office, the work is still being done, and in some cases more efficiently as there are fewer meetings and distractions to consumer employees’ time. And employers are reaping the benefits of lower overheads as a result of smaller premises and employee consumables.

Those that have now had a taste of work from home freedom may choose to continue along this route in future.

Create a positive place– it’s important to create your own personal space which disconnects you from a corporate office. This will help protect you from outside distractions and the pressure that comes along with them. Find an open space that will help you to be creative but also allows you to be focused.

Find a routine– routines are mostly characterised as boring and safe but research has shown that by following a routine for example following a to-do list, keeping a schedule or beginning your day with the most difficult work, improves people’s workflow and effectiveness.

Have a clear purpose – It’s not always about doing work to find your footing in the market but sometimes doing work that connects you to a broader purpose. Purpose creates a bridge between your personal interest and motivations and fulfils a need in the world.

Engage with people – Social isolation can be a great risk for gig workers, therefore it’s important to engage with people (even if through online meeting technology) and formal peer groups which you can turn to for advice and encouragement.

Develop a work ethic – The quality of work that you deliver represents who you are. You no longer have a boss who constantly looks over your shoulder. Therefore, self-discipline is key. Set standards for yourself and live up to them.