The Bedroom at Arles 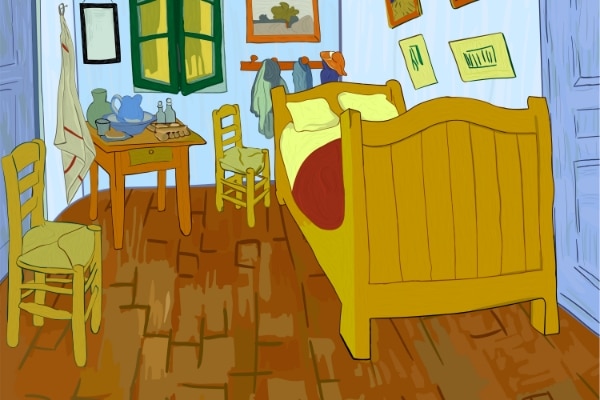 It was given to me to be in its presence twice:- once at the Van Gogh House in Amsterdam and once at the National Gallery in Canberra.  Both times I was under severe strain.  In Amsterdam, my anxiety came from being part of a group who thought that 48 hours in Amsterdam demanded more earthly forays into the sort of pleasure you seek when you are 22 years old and have the run of a city famous for its pleasures on display for the ultimate select before you pay.  In Canberra, the stress came from having only 5 hours to see an entire collection of Impressionists on a tour of the world, courtesy of the French Cultural Attaché office in Paris.

Apart from those two opportunities, I must have spent countless more hours pouring over pictures of the painting since spotting it the first time as a junior school kid on a Free State farm when my sister finished her degree and came home with all her books.  These books introduced me to lots of new ideas, including some stuff from the psychology textbooks entirely appropriate reading for children my age.  The art appreciation volumes kept my attention longer though and started my fascination with the bedroom (I am talking about the one in Arles for those of you who thought I was still in the psychology textbooks or on the tour in Amsterdam) which is still with me 55 years later.

Why the angle of the floor?  Why the chair turned to the door?  Should the bed have been so obviously uncomfortable, narrow and not made for sleeping in?  The blues and yellows in a sad picture which is so obviously trying to be colour happy?  Why?  Why? Why?

I now know some of the answers to some of the questions.  Not remotely all of the answers, because for a painting like this the learning potential inherent in the flat piece of canvas could take an entire lifetime of discovery.  In the typical state of mind induced by the Tocqueville paradox, I know that if I had known then what I know now, the painting and being in its presence on those two occasions would have been immensely more enriching.  What I needed at the time was a preview experience which would have sensitised me to the things to look out for in the painting before seeing it.  Not Wikipedia … please not Wikipedia.  Not a YouTube video done by someone who thinks they know everything and whose stuff we feel compelled to watch because their sense of naiveté is so touchingly endearing.  Not a 4-week Coursera course which is so intent on pleasing everybody that it ends up pleasing only those who would have felt thus about anything they had been “taught”.  Something deeper, better, and more insightful than what these options would have been able to afford me.

My chances of being in the presence of “The Bedroom at Arles” again are practically zero now.  But if there was a chance of it happening again, I would have wanted a binge-watch opportunity from something like Showmax.  Just 15 minutes of undiluted and indulgent listening to people who really know the bedroom while they point out the hidden subtleties; the slope of the floor, the colours of the curtain, and bedstead, yes … but also the Provencal landscape features visible through the open window and the reasons for the washstand.

The need for continuous adult learning is now so real that it is no longer something only people who want more than splendid senility in a retirement home is talking about.  It is something we instinctively know we all need.  Adults have been exposed to learning new ways of doing things over the past few months while COVID-19 ravaged our world of languid security in the spaces we thought we controlled.  The world of learning, however, thinks that this need could be satisfied with what we have on offer now: classes to show grandpa how to make sourdough bread and one of those yobs who has found a way of subsisting on restaurant scraps while also keeping 50 high-production hens fed on what even he could not eat and now thinks to have a Go-Pro and an incoherent theory on how to save the world makes for time on YouTube.

While the pandemic did give Showmax and Netflix the boost these companies could not have executive managed themselves, it also made us aware of the lack of something out there which could respond to our need for serious information about something as life-changing as being able to be in the presence of “The Bedroom at Arles”.  A University of Binge which could, in 15 minutes of screen-time, give us what we need to know about brands and branding, introduce us to segmentation and why it is a lifeline for a struggling business, and divine the essentials of logistics to help us know how it is different from what it was before COVID, the core requirements for a really effective supply chain even when China has its next virus ready for export, and so much more that could be classified as serious information ready for adult learning in an idle 15 minutes before an important business meeting or while waiting for our chance to pitch for a project we need to have a bit of a knowledge edge on.

This is the type of learning which should be available to anyone with 50 US to spare and the need to spend it on something which will make them a better person with more knowledge than they had 15 minutes ago.  It is also the knowledge that is not available at the moment and a gap in the market for anyone with a useable platform and an inclination to impart knowledge.